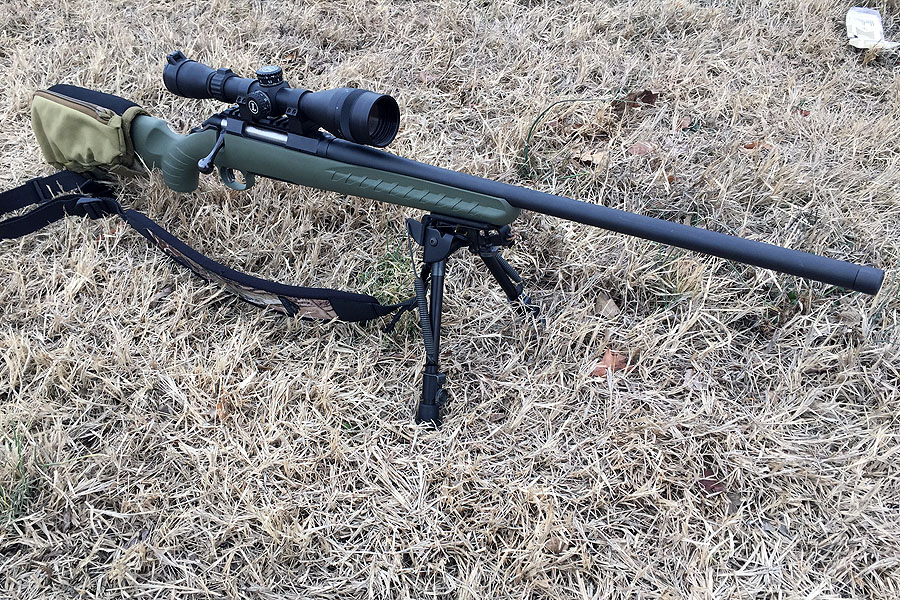 The Ruger American Predator Rifle won’t win any sexy rifle contests but it’s a shooter and you won’t need to rob a bank to afford one.

Sometimes we get a rifle in that doesn’t look overly sexy in the packaging, but then proceeds to blow your socks off. The Ruger American Predator in 6.5 Creedmoor is one such weapon. When it comes to accuracy, this thing is a monster.

Left side of the Ruger American Predator Rifle where you can see the bolt release and safety.

The American Predator ships in a cardboard box, and is very much a no frills gun. At an MSRP of $529, and a street price closer to $429, I wouldn’t expect much. The Ruger fits in with a particular niche of economy class rifles, right with the Thompson Center Compass and the Savage Axis 2. I like that we can now buy quality rifles at this price point, but one should not expect Mercedes Benz level extras.

You can clearly see the integral V-shaped bedding blocs that match up with machined out slots on the action. Not pretty but very functional.

The Ruger comes in a green plastic stock, that in a worse mood I would call cheap. It is not, however, flimsy. Looks are deceiving on this one. The stock is thin and small, but the rigidity is good. In fact, it is better than others at this price point. The comb is undersized for proper cheek weld, but that can be fixed with some thin foam and duct tape. Don’t laugh, that is how we adjusted them on the M40A1 back in the USMC. I didn’t see functional adjustable cheek pieces until 2006. It’s not the prettiest thing in the world, but it works. Inset into the stock is a plastic rotary magazine, with a 4 round capacity.

The blade in the trigger which is much like a Savage or a Glock, allows you to have a lighter trigger pull that is still safe. The author didn’t even notice engaging the “blade.”

The trigger on the Ruger American Predator is user adjustable from 3 to 5 pounds. I left mine at the out of the box setting, which was 4.5 pounds. The trigger is crisp, with no take-up. There is a blade in the face of the trigger that acts as a safety, much like a Glock or Savage. I have heard complaints about this, but I have none. It is the kind of thing you don’t even notice when shooting, and not out of the normal at the price.

The barrel comes from the factory threaded 5/8-24 which is awesome because it means that you can add your own muzzle brake or suppressor without needing to pay a gunsmith $80-$150 to chuck it up in a lathe and thread it for you. That’s added value and we think all rifles should come threaded with a thread protector cap.

The barrel is on the thin side, which initially had me concerned about accuracy. But it does help keep the gun light. In 6.5 Creedmoor, out test model tips the scales at a svelte 6 ½ pounds. A nice touch, the barrel is threaded from the factory for suppressors or muzzle brakes.

The bolt is a three-lug configuration, with a 70-degree throw. You aren’t going to confuse the Ruger American for your custom Surgeon in the dark, but I again have no complaints. The bolt is smooth enough, the handle is small but functional, and it fed from the magazine with no issues.

The real value proposition of this gun came from the accuracy though. Ruger says MOA accuracy, which is impressive at this price. But with Hornady 140 grain Match, our test model did ½ MOA, over and over. And it did it again at 600 yards. For a $450 dollar gun, under 7 pounds, that is extremely impressive.

The Ruger American turned in numerous 1/2 MOA groups at 100 meters.

Given the accuracy at the price, I am willing to call this a new standard in economy guns. Is it a work of art? No. Does it work every time and punch above its weight on precision? Yes, it does. And for the dollar, you can afford a mountain of training ammo.